Crimea has hit the headlines in the last few weeks, so I thought I’d post a few pictures that I took on on the Perekop Isthmus, the narrow neck of land that joins the Crimean Peninsula to the mainland of Ukraine, during a brief stop on a bus trip from Odessa to Feodosia in 2008:

The text on the plaque in the photo above left reads “Command point of Marshal of the Soviet Union V. M. Vasilevskii and General of the Army F. I. Tolbukhin during the period of the storming of Perekop, 8 April 1944”.  The ISU-152 assault gun and M30 howitzer in the second photo are situated beside the railway line by a monument at the Tatar Ditch, a trench line across one of the narrowest parts of the isthmus that was originally dug in the 17th century and was reinforced in 1941 against the German attack.

The two monuments below are located along the ditch, and commemorate events during both the Russian Civil War and the Great Patriotic War. The text on the monument in the photo on the right reads “Ai Monai Position. Here in 1919, parts of the Red Army fought with the White Guards and the Interventionists. From December 1941 – May 1942, forces of the 51st, 44th, and 47th armies heroically fought against the German-fascist invaders.” 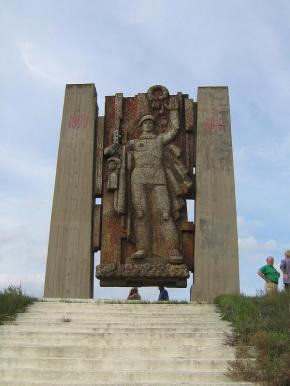